It was a typical weekend in Malawi. I got to doing lots of much needed chores at my house and didn't make it to Maji Zuwa until Saturday morning. As the morning went on, I got to talking to Matt and after telling me about his trip to Zanzibar, I was invited to tag along with him, Ken, and Geoff. How could I say no? I went back to my house that afternoon to pack (luckily I had done laundry and had it drying in the sun) and the following morning we were on our way to Tanzania!
We left Maji Zuwa on a Sunday morning and made it across the border to the next big town, Mbeya where we stayed the night. We had two options on Monday morning of how we would get to Dar Es Salaam, the port city where we were to catch the ferry to the island. We could take the bus (18 hours) or try to get a flight (1 hour). We took a chance and headed to the airport and with only minutes to spare, were able to get tickets and board the plane! There is a new low-cost airline based in Tanzania called Fast Jet. If you are able to book in advance, the tickets from Mbeya to Dar Es Salaam are only about $20. We also took this flight on the way back. The company also offer flights to Johannesburg and now Lusaka. It's a great thing for this part of Africa and it would be amazing if they start flying to Malawi! After arriving in Dar, we got a taxi straight to the ferry office to catch the 12:30 ferry to Stone Town on Zanzibar. Breakfast in Mbeya and dinner in Stone Town is pretty spectacular, not to mention unheard of!
On the island, we spent one night in Stone Town and two nights at a place on a northern beach called Kendwa Rocks. While at Kendwa, I was able to schedule a Spice Tour on the island. Because I was the only one to sign up (nerd alert!) I got a private tour of the spice farm and I loved it! I spent the morning walking around learning about all the plants and what they are used for. At the end I was able to purchase some cloves and vanilla pods as well as a mix of other spices for cooking. After finishing my tour and making it back to Kendwa, I saw that the guys were still on their excursion to swim with dolphins so I took the opportunity to lay on a lounge chair and soak up some much needed rays. It was so peaceful to lay in the sun and sip a cocktail with not a care in the world.
One of my favorite things of the trip, besides the great people I was with, was the yummy yummy seafood! We ate so much octopus, calamari, lobster, and crab. I was in heaven!

Here are some pictures:


Posted by Abbie Morneault at 11:45 AM No comments:

Not only is the title of this post a reference to one of my favorite episodes of Doctor Who, it is also how I'm starting to feel about my time left in Malawi.

I have roughly four months left in the Warm Heart and I'm trying to live it up as much as possible.

Let me give you a quick recap of the last month or so:


Thanks for reading! I'll try to get a few more posts up soon.
Here are some random pictures from the last few months:

Posted by Abbie Morneault at 11:44 AM No comments:

Sorry for the lack of posts since I returned to Malawi!

Thanksgiving was a big deal at Maji Zuwa this year. We were lucky enough to have the US Ambassador to Malawi as a guest for the afternoon, as well as her husband who is a retired US Ambassador.

Also in attendance were some local peace corps volunteers, latitude volunteers staying at Maji Zuwa, an Argentinian who happened to be traveling through, a couple from Karonga working with the Paladin Mine, and Matt.

It was a long day of baking and cooking and by the end of it I was covered in flour and sweat but it was well worth it. We had a great lunch and I'm thankful for all the help in the kitchen! I also had a lot of help from my mom. She e-mailed me some recipes to work with and helped to find substitutions as needed.

What was I thankful for? The fact that the electricity stayed on the entire time I was cooking with the toaster oven! 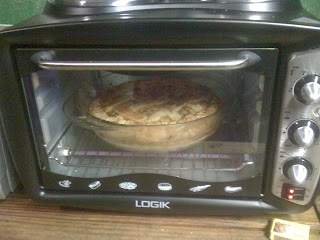 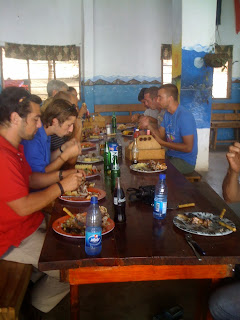 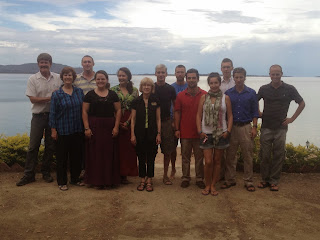 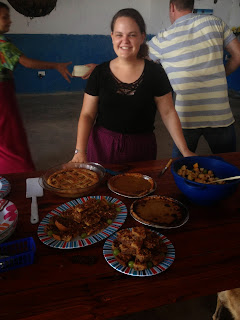 Posted by Abbie Morneault at 3:28 PM No comments:

We have been eating really well lately. Our neighbor Aaron gave us all of his leftover American food from care packages when he left for the states and we have been putting it to good use.
Carly wrote a post this week about her top 5 foods that we make. You can read it at www.carlymalawi.blogspot.com
For each meal we typically take one thing we've gotten from care packages and mix it with a traditional Malawian ingredient. On my wish list page (link at the top of the page) you can see a list of ideas for care packages.
Our friend Nick, a peace corps volunteer near us, visited Khwawa this week and shared a block of velveeta. We made the best macaroni and cheese ever! To add some protein to our meal, we sautéed some soya pieces with garlic, Parmesan cheese, and some other spices from our bin. Needless to say, I had a great nap afterwards. 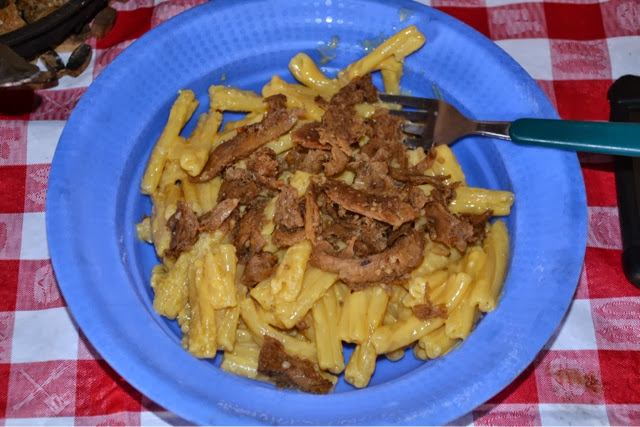 Posted by Abbie Morneault at 10:37 AM No comments:

It's been a seven days since I landed in Lilongwe and my five weeks in America seem like a dream.

Saying goodbye at the airport wasn't any easier but this time a little less dramatic. dryer eyes, shorter hugs. We're old pros by now! I encountered zero problems traveling from Dayton to Lilongwe. In the capital I was greeted by Carly, who escorted me back to Khwawa. We made it to our house on Sunday morning and I was thankful to be able to sleep in my own bed that night. Jet lag has been tough and I think I'm just now getting over it; glad that I have a week-long  buffer before school begins.

I've had a week to think back about all the things I was able to do during my visit home and I am overwhelmed with gratitude to those who made these events happen. I went on vacation with my family, visited friends in Kent (and Seven Hills!), was invited to speak at my church, welcomed guests for a backyard party, and participated in the baptism of my niece/goddaughter. I played golf and went to the aquarium. I'm still amazed at the amount of people I was able to visit with and the things I was able to do.

Thank you to those who took me out to a meal, made me food, donated funds to help me throughout the next year, or pledged to send a package. The support I received during my time home heart-warming and will stay with me for months to come.

I've woken up and it's back to reality. Building fires and tucking in bed nets. I'm back.


Posted by Abbie Morneault at 12:11 AM No comments:

This Was PROBABLY A Lot Of Fun

Over the last few weeks I've been scrambling to cover last minute material before my form 2 students take their national exam, the JCE. This is a pass/fail exam that must be passed in order to continue in secondary school.

A few weeks ago I planned to teach a unit on probability. My school lacks a lot of materials when it comes to mathematics. And when I say that we lack a lot of materials I mean that we have none. Typically I would teach this lesson with dice, counters, or blocks of some sort. Instead, I passed out baggies filled with candy I bought at the trading centre and the kids went wild! They had fun being split into groups learning about theoretical vs. experimental probability. 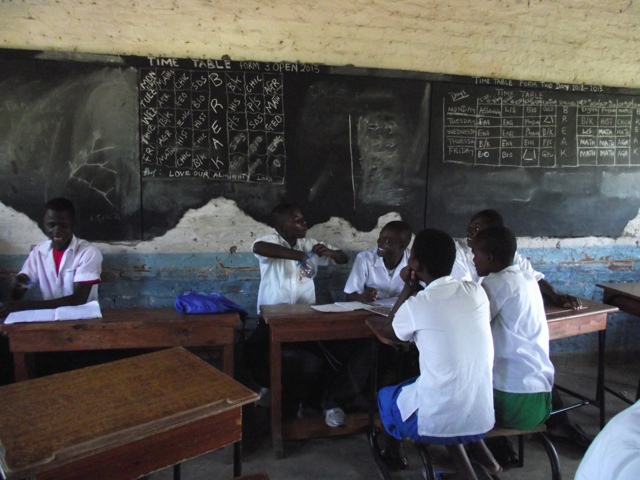 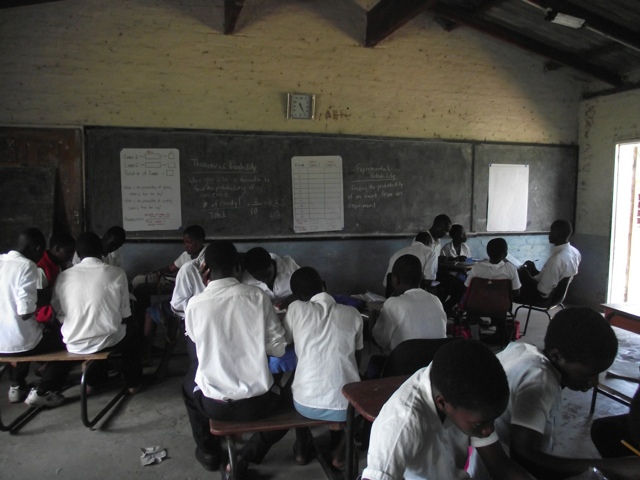 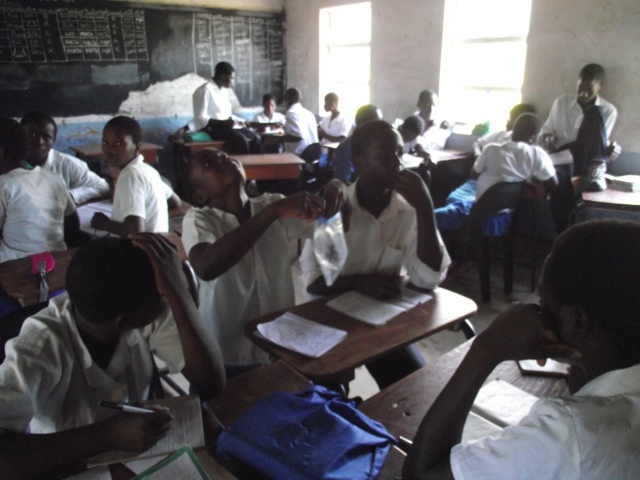 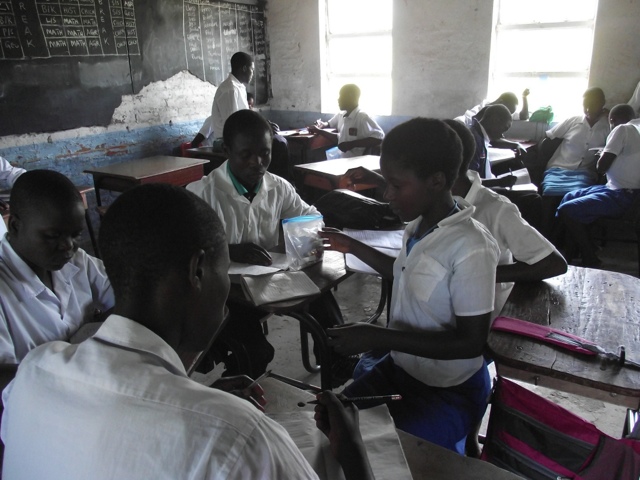 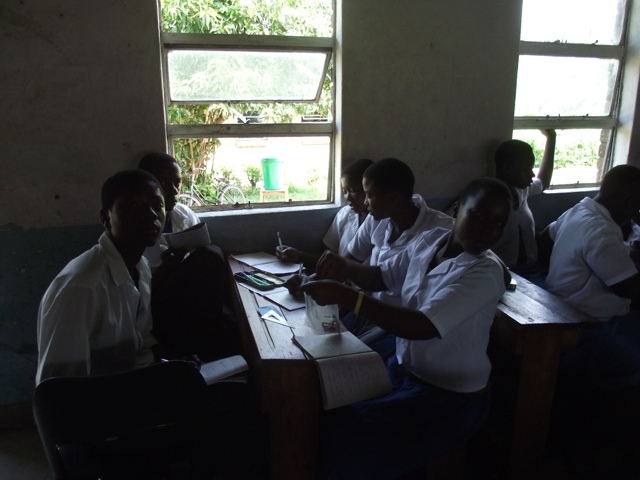 Posted by Abbie Morneault at 9:53 AM No comments:

Sorry for not posting in the last few months!

There has been no Internet in my area for the last three weeks but I've just come to Mzuzu to get some wi-fi. To take advantage of the Internet I thought I'd post some pictures of my house in Khwawa.

This is pretty much everything we own. Our beloved shelf. 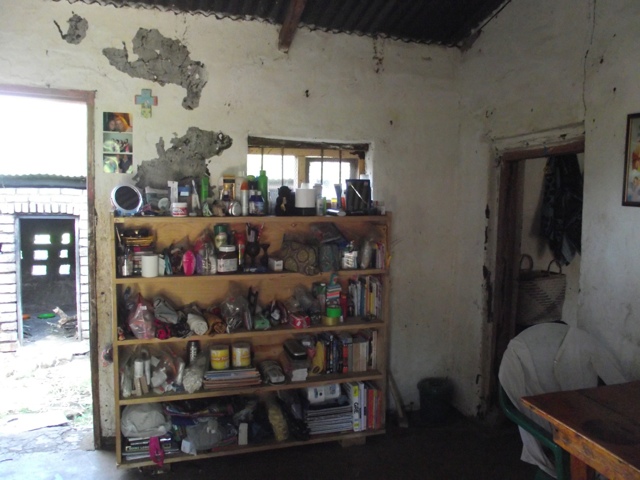 Our dining room table. So much rice has been eaten here. 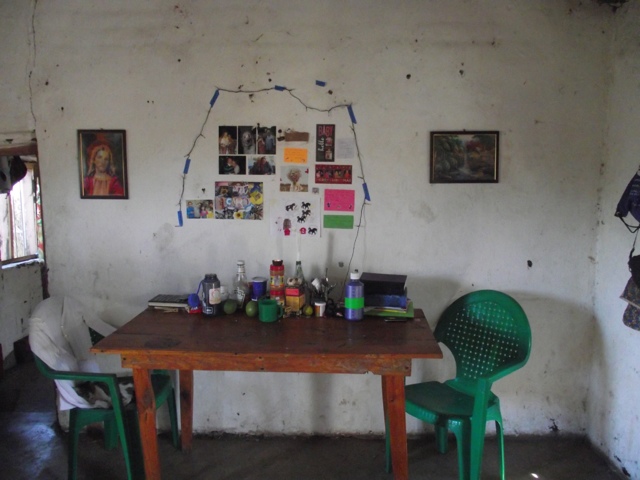 The shower! And by shower, I mean a bucket and a big plastic cup. 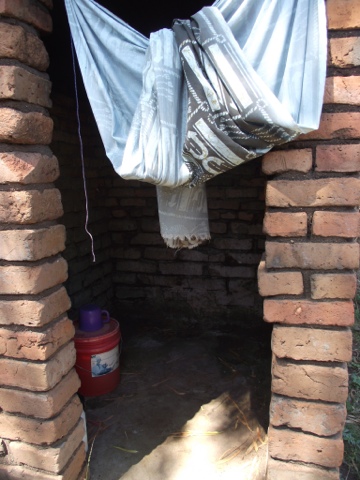 Our bedroom. The nets are a little annoying but I've gotten used to it. In fact, it helps me sleep a little easier knowing critters aren't crawling all over me. 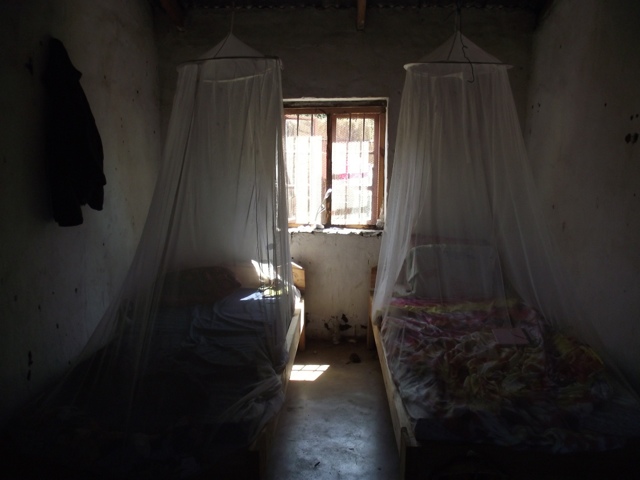 The sink! Water is life. 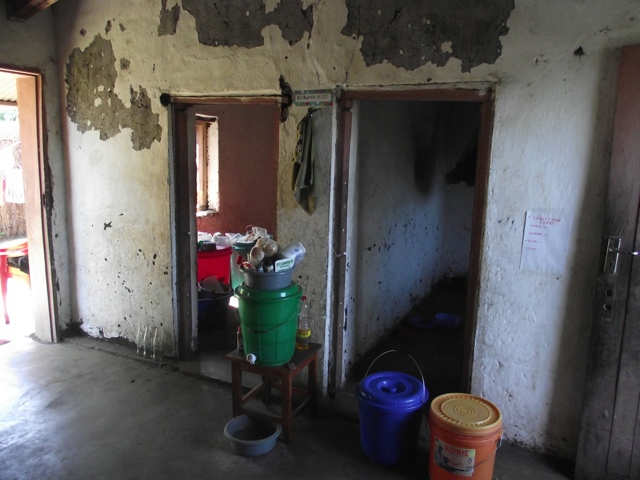 Posted by Abbie Morneault at 3:01 PM No comments: 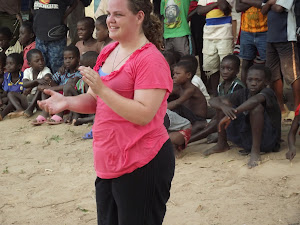